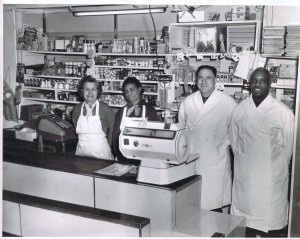 One of the grocery stores operated by followers

…I Came to get GOD in all government and even in every ordinance! That is the mystery!

It is for this cause I AM here tonight. It is for this cause we assemble from time to time in our Righteous Government meetings, to bring about Righteousness as in Jesus, in all government and even in every ordinance. That is what it is for. Then when we assemble here and elsewhere I do not blame you for not being egotistic and self-exalted, but I do consider you will leave space and place for our visiting friends and others to talk on government and governmental affairs–I mean if it is nothing but how you want the government, the city or county government to see that the highways are straightened out and made more comfortable and more safe for traffic.

Any thought that can be produced for the advancement of our present city, state or county or township government, it should be produced and represented and proposed by you. Even though you be an ordinary citizen and not an official, make your proposals to your respective representative in the governmental official office–your respective proposals to your respective representatives in the state Senate and in the House of Representatives–make your proposals if it is anything good you can think of. You may not be the lawmaker yourself directly, for you have not been selected and elected to fill this official duty, but it is your duty as citizens to bring before the mind’s eye of those who are representing and those who are representatives of you in the Senate and in Congress, the things that are necessary for the betterment of our present city, state and county, and even our village government. That is what I AM talking about!

A thought came to ME quite some time ago. As a proposal I had considered, especially around Kingston here, that filthy, unsanitary river should be cleaned.

We as taxpayers and representatives of a better government for the people and by the people, to free our state and our county and our country of sickness and incurable germs of diseases and mosquitoes and other insects that are detrimental to our well being that prohibit a perfect sanitation, do present such proposals to our city and our state officials that they might make law to that effect!

These unsanitary streams, not only in Kingston but elsewhere in Ulster County, should be considered, and they should clean those rivers and streams and other places that are unsanitary and make a sanitation that will be a sample and an example for others!

The river, as I afore said, around Kingston–those old barges and boats and a whole lot of trash and everything in the river there as creators of germs and diseases and insects and other pests, should be eliminated, and we should petition our respective representatives in the Senate and in the city government to consider such things!

Bring those thoughts to their mind and attention and let them consider to make the law to have those places made more sanitary, for our present existence and for their posterity and for the posterity of others for the future! I thank you!

PEACE, EVERYONE: I do not wish to bore you, but whilst this thought as just conveyed is upper mostly in the consciousness of many, I further wish to say in accord and in line with the foregoing statements: Our sanitation should not be merely confined to the streams and the rivers and the creeks but we should have a general clean-up throughout this county!

In all of your homes, business places and elsewhere we should have a general clean-up and make our county and community in which we live a place fit in which to live! That is what I AM speaking of!

Now these thoughts should be considered and I hope all will take cognizance of it for there are many things I have to bring you from time to time to advance our civilization and to bring about a moral betterment generally, and perfect a sanitation in your respective communities. I thank you!

Now whilst I AM on MY Feet I would just like to say, as usual we have visiting friends. We want them to feel free to speak and act and express. I do not wish to be a filibusterer! I may talk excessively, but not wilfully in the act of trying to obstruct justice and prohibit others. I speak because I move volitionally, but with all sincerity and as conscientious as I can be. I desire others to have the same chance to speak, therefore our visiting friends are invited to speak, and those of you among us as MY Co-workers and Followers and Friends are free to speak on things that pertain to government and to law and our divers ordinances. I thank you!

(FATHER DIVINE is in the forefront bringing to the attention of the general public and officials the need to clean up our water ways from diseases some fifty-five years ago. It is said, FATHER DIVINE came fifty years ahead of time. How marvelous it is to know, they are absolutely right.)