Here is a relevant letter (scan of original file carbon copy; yellow highlighting applied for this post) from FATHER DIVINE which advises pragmatic steps when faced with contagious diseases in the general population, and which affirms that the steps of Health Department to stop such spread are evidence of HIS Mind and Spirit in action: 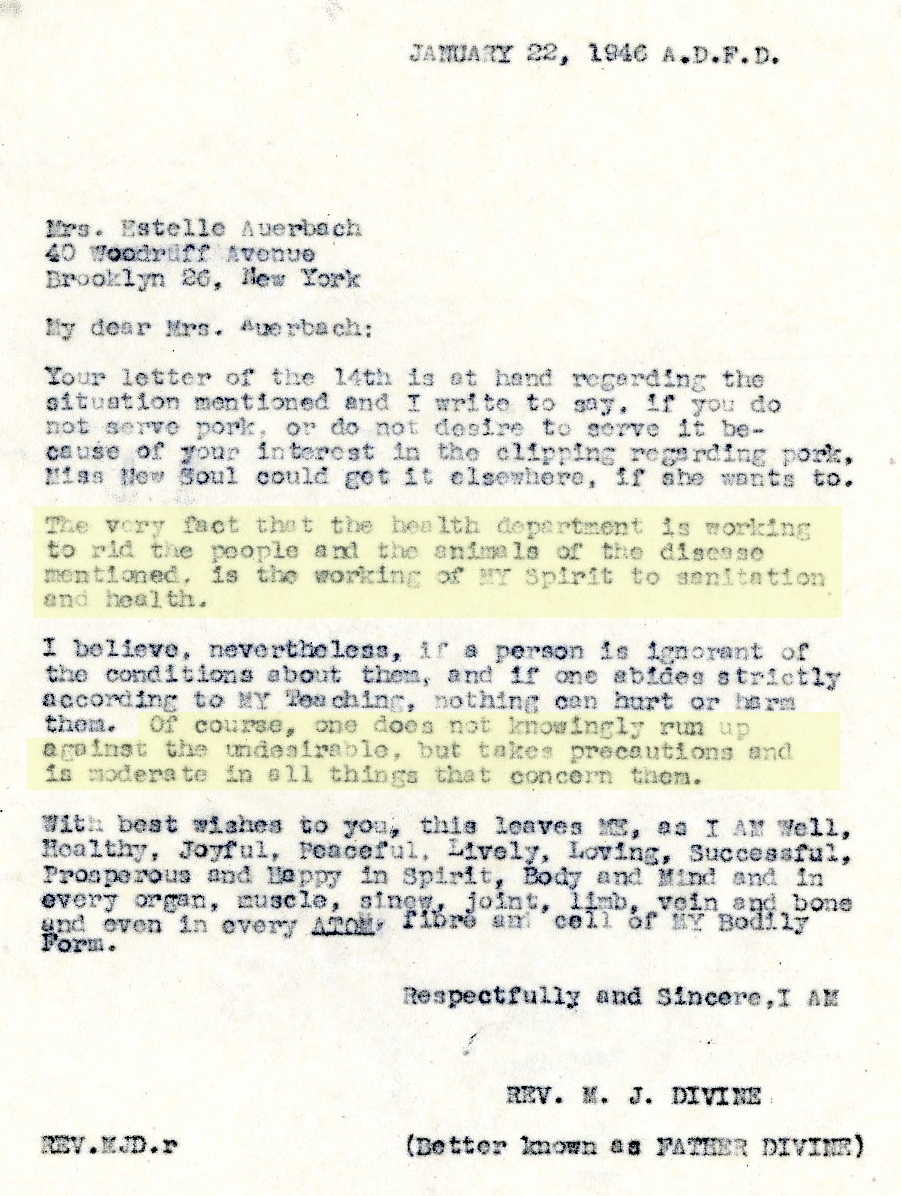 On June 6, 1945 ADFD, FATHER DIVINE wrote to Miss Anna M. Betz, Director of the Social Service Department of Harlem Hospital, New York City.  He touched on several issues of importance, including modern religion and the need for Constitutional reform that will abolish the Electoral College and employ technology to institute direct democracy.  Had the United States heeded this direction from GOD ALMIGHTY FATHER DIVINE, it would have been spared the disastrous presidencies of George W. Bush and Donald J. Trump and all the damage and division they have inflicted.

“Likewise with Government similar reforms in outmoded customs must be made.  When the colonies became the United States of America, it was necessary, at that time of limited methods of communication, to delegate electorates and to have an electoral college that would cast the final votes.  But now in this day when voting machines are in use in almost every poll and could be installed everywhere, even with transmission wires that could register every vote automatically in any central place in the United States, and with instantaneous communication available through radio, it is time we revised and modernized the equipment of government to facilitate a true democratic election.

“This is only one of the necessary reforms that must come and must be made in the mechanics of Government to insure justice and to keep pace with the advances of science.  If we do not do so, this Government will become as ineffective in reaching the needs of the people as religions have become, because of the unwillingness of the leaders and teachers in the churches and the so-called representatives of GOD, to advance in the knowledge and understanding of the scientific development of creation according to the Plan and Purpose of GOD.”

There are at least 50,000 letters from FATHER DIVINE on file in FATHER DIVINE’s Library and Museum at Woodmont, which are being digitized and cataloged so that these precious, world-guiding Words of GOD will be preserved and accessible to others in perpetuity.  The vast majority of these letters are file carbon copies.  Below is a pdf of the file carbon copy of FATHER’s June 6, 1945 letter to Miss Betz.

Peace.  You may have noticed that the historic Peace Mission website created in the 1990s and hosted for years by a small local provider at libertynet.org, has disappeared from the internet.  It won’t be coming back at that address, which was sold by the owner of the company and no longer has anything to do with the Peace Mission.

We are working on a major new website appropriate to all the advances in web and multimedia technology that have been made over the decades, but like the old one, it is a very big job involving thousands of pages of material.  The new website will not be available for at least one year.

In the meantime, the original material is archived here at http://peacemission.info/fdipmm.  While it is seriously outdated in appearance and functionality and is difficult to map or navigate, it is full of important material and we wish to keep it available to readers.  Click the link in this paragraph or the image below, which is also permanently duplicated in the sidebar to your right.

GOD FATHER DIVINE speaks on themes including the relationship between the Impersonal Spirit of GOD and the Personal Body of GOD, exclusive vs. inclusive friendship, the relative value of intellect, and talents being given for service to GOD and humanity, not selfishness.
Date and time uncertain, but probably Circle Mission Church, Philadelphia,
January 23, 1954 ADFD.  Peace Mission Reel 17, possibly 17-1.