I would like to say to our visiting friends, hearers, and even followers who have not heard and known.. Do not know, whichever.. MY Actual Work and Mission among this people; I recall when men in this part of the country, New York City, in Baltimore, Maryland, Philadelphia and Washington… the northeastern part of this country, about thirty, forty and fifty years ago… they used to go around soliciting, begging and stealing on the streets; and I recall I rose up in such enthusiasm and such emotional expression, some thought, no doubt, I was somewhat unbalanced in mind. 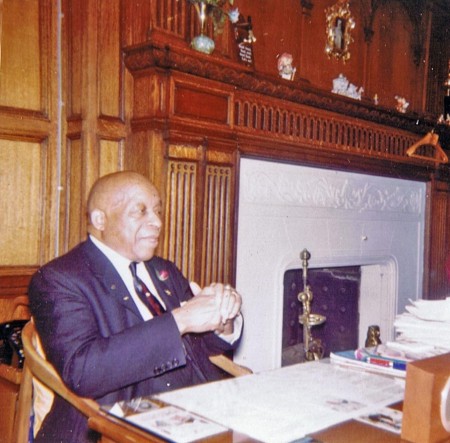 I said, “I AM going south and prove to the world the Gospel

can be preached without money and without price!”

Every representative in the ecclesiastical world, even to the “stump-knockers,” “Bible-beaters” and street corner preachers, they all claimed that you were obliged to go around begging and stealing, in a way of speaking, to carry the Gospel.

I said, “I will present MY BODY as a LIVING SACRIFICE and I will prove to the world conclusively, the Gospel can be preached without money and without price, exactly according to the commission of the Disciples of JESUS of nineteen hundred years ago!”

I said another point too in MY enthusiasm, in MY fanatical and radical emotional expression;

I said, “I will prove that CHRIST died that you might live,

and then go to heaven!”

“The wages of sin is death but the gift of GOD is eternal life!”

I said, “I will also prove to the world conclusively,

‘Out of ONE BLOOD GOD created all of the nations

To dwell upon the face of the whole earth,’

and I have come to bring them all together!

to that end, and I will not be discouraged until

I have accomplished that for which I came!”

Just about the time the Jim Crow law came out in the South I made another trip south to that end to bring MY BODY before the destroyers, willing to sacrifice MY LIFE for MY Conviction; realizing My Conviction was and is the only Hope of the Redemption of all humanity! It was unique, it was a Sample, it was the Example, and I presented MY BODY thirty-two times as a LIVING SACRIFICE to that end. I came out UNHURT and ABSOLUTELY unharmed and I stand the same today!

This is just a slight sketch and a reflection of a percent of a fraction of a grain of the seed idea I gave birth to through the sacrifice of MY BODY, as a LIVING SACRIFICE, to bring about a Righteous Government on earth among men!

I said, “I will tell people…I will go in the worst places that there are as far as segregation and discrimination may be concerned and present MY BODY as a Living Sacrifice to bring about the emancipation of such people that have been mistreated, under-privileged and non-privileged, and prove that ‘GOD so loved the world HE gave HIS Son, that whosoever believeth on Him shall not perish but have everlasting life’!”

I said these points for consideration:

“We must let the world know CHRIST died that we might live;

He did not die that you might die and go into the grave.

These points were read to those of the ecclesiastical world and especially they criticized it, even as they do today, but more so at that time apparently, because they did not see the results of MY Mission in evidence and they did not know I actually AM the MASTER of OMNIPOTENCY! They did not know I AM MASTERY over all circumstances and conditions in reality. They did not know I could change the hearts and minds of the children of men and unite them together and bring an abolition to everything that creates undesirable conditions, confusion, misery, disappointment and failure; but now I AM showing them distinctly I CAN and I HAVE!

This is the sample, this is the example, but yet it is not demonstrated in its fullness what is actually being done in the hearts and lives of the children of men; for the mental and spiritual work transcends every abstract expression of the demonstration of the personnel of the children of men that have brought about this great sanitation into expression though I know you are cleansed physically. Your faces are not broken out with all sorts of contagion like they were when you first met ME! I have cleansed the personnel of the children of men by transforming them characteristically and dispositionally, hence, physically they are new creatures and they look beautiful! And they express MY Spirit, MY Love and MY Life beautifully as it is manifested within. Aren’t you glad!