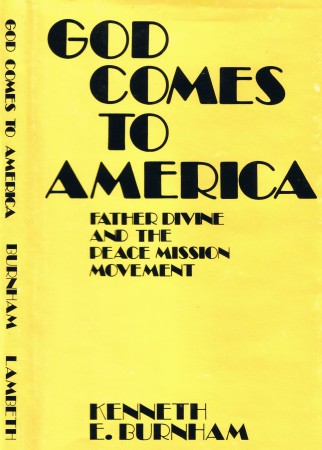 “At last a study that takes seriousely one of the most controvercial, important, and neglected religious leaders of the twentieth century – Father Divine, whom thousands believed to be God incarnate. Based on rare source materials, this readable account traces Father Divine’s career, spells out his theological position and economic message, and examines the role of a charismatic leader in a communal religious organization”

Professor Kenneth Burnham wrote this book in 1979 with great understanding. It is an honest effort to portray Father Divine and the Peace Mission Movement as it actually is. He treated it as social/religious movement.

Dr. Burnham’s field is Sociology. so he wrote as a sociologist in a manner that other sociologists would consider professional. Therefore he was limited somewhat to the mortal plane of thought. On this plane, he saw Father Divine as a man, and not as the followers see him. They see him as a the Personification of God in the Fathership degree.

The book is valuable and mostly positive, but the Truth about Father Divine is better revealed than told.

Preface: A Note on Research

The author first became interested in the Peace Mission Movement as a teacher and student of the sociology of religion. For many years he has taken his classes to visit services at the Circle Mission Church in Philadelphia, because they so well exemplified, in a fresh and even startling manner, concepts used in studying this subject.

In 1960 it was decided to do a serious study if the Movement, focusing on the charismatic aspect. The original intention was to interview as many as a hundred followers, but this soon turned out to be impractical. It became obvious that under intensive observation, a process which involved out attending meetings at all three churches in Philadelphia and two ub New York City, the followers became very sensitive to outside judgments and wary of being misunderstood.

A second problem making interviews difficult was the separation of the sexes. Men do not converse with women in the member groups except on business, and then very minimally. Even informal talks with women  were brief; after a few shy words they were gone. A female associate helped with some “semi-participant observation,” which was useful. At banquets (communion meals), at restaurants, at praise meetings (worship services), in the limousines of the churches, in the hotels, and at Woodmont the sexes were always separated.

A third problem in meeting large numbers of followers arose from the custom of providing each “stranger” with a host. Furthermore, during the working day members were not at home or available for interviews. If they were not working, much of their time was consumed on Bible classes, New Day reading groups, Communion Banquets, administration of the churches, and religious services. They were found at leisure only at Woodmont on Saturday or Sunday afternoons.

A compromise arrived at for the author – to become a “semi-participant observer” – allowed him to attend Communion Banquets, services, Wedding Anniversary Celebrations (1961-1978), Woodmont Anniversary Celebrations (1961-1978) and to eat once or twice a week in the cafeterias of the Philadelphia churches or in the restaurants of the Hotel Lorraine or the Hotel Tracy. He attended Saturday and Sunday Communions (dinners) and Sunday services in the New York churches during 1961. Several Saturday and Sunday visits of many hours’ duration were made to Woodmont from 1960 to the present.

Altogether at least fifty meetings and fifty Communions were observed between 1960 and 1977. At least a hundred different people were informally interviewed but only a few responded to long interrogations as originally planned.

For what the author considers a mater of professional ethics, nothing is quoted in the text which was not said in public as a testimony or printed in the various newspapers of the Movement. However, in the interviews a good deal was learned about attitudes and personal experiences.

International Peace Mission Movement is in no way affiliated with the seller of this book nor are we entitled to any proceeds from its sales.