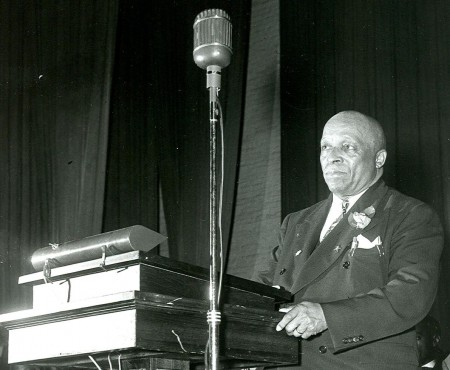 Here we all are again, there I sit and stand, here I go and there I come and here I shall remain! Aren’t you glad? Realizing this is not mortality, matter, neither is it personality, neither is it individuality but a living reality that has been made real, tangible and practical and shall be recognized and established universally!

I have long since declared by composition as a motto for humanity’s consideration as I Am present everywhere, I have declared–

“I will preach Christ in words but more so in Deeds and in actions, and I will put My Spirit in them and cause them to walk in My Statutes.”

As a man, AbrahAm had many seeds, did he not? His seeds were as the stars of Heaven. The transmission of the Impersonal being reinculcated and reincarnated, reproduced and repersonified, it is just as expressive. Aren’t you glad? That which is expressive it is expressive, for it is incorruptible and undefiled, it remains the same.

Conquering Own Will, Greater Than Taking a city

Then I say it is a privilege to realize, as AbrahAm conquered his own will, he was greater than one who had taken or would take a city. Conquering his own will, he brought all others in the same category into subjection to the same supernatural Presence by which his will was conquered. Can you not see the mystery? For it was an Impersonal victory! Although it was observed individually, it was a principle as a standard, Impersonal and expressive and operative for as many as would receive Him, and as with Abraham, so with the unfoldment of this mystery today; that which is good, that which is desirable, that which is incorruptible, that which cannot fade away will remain throughout all Eternity! Hence in the preaching of Christ in words, you may observe a person, but when I preach in deeds and in actions and transmit My Spirit to the children of Men and cause them to imbibe Me and reproduce Me, there and then you will know that it is something more than mortal to command!

Speaking in Deeds and Actions

I speak in Actions and I speak in Deeds! I will speak more distinctly in  the future than I have been, for humanity as a whole were not ready to receive Me, but as a civilization advances and the light of this understanding unfolds itself in the hearts and lives and the minds of the children of Men, they will understand Me better. But aside from all of the understanding that may be accumulated and inculcated and even reincarnated, I will put My Spirit in them and cause them to walk in My States automatically! For what said the Scripture, yea the Gospel Epistle concerning this Mystery–

“Behold we put bits in horses’ mouths that they may obey us, and we turn the whole body about.”

Then I say My Words are inadequate, though, if I spoke with the tongues of all of the nations of the earth and with the divers philosophies of all civilization and with words, yea all of the words out of all of the vocabularies of humanity, still the words would be inadequate to explain the significance of what God really Means Among this people.

All Philosophies and Doctrines Inadequate Without the Iinfinite

You have often heard Men say, “Talk is cheap, but it takes money to buy land.” The philosophies and the doctrines of Men may be explicit and very polished and they may speak super-scholastically, but unless they recognize the supernatural Presence of the INFINITE and let God speak and move in them, their talk and their works are all in vain.

Now I Mean to speak in every field of endeavor and automatically cause the masses of all humanity to think and act differently. Aren’t you glad? Because, it has long since been declared–I Am re-declaring the same, I will speak in your hearts and in your minds, for,

“It is not by power nor by might, but by My Spirit, declares the Lord.”

It is a privilege to realize, by the preaching of the Supernatural Christ transmitted, by causing the Christ in the hearts and lives of millions to be reincarnated and preached in them, they have thrown off their cloaks of sin, of vice and of crime – not by what I have said out of this Tabernacle of Mine, but by the Spirit that I have transmitted to them and cause them to walk in My Statutes.

The Gathering of the People

I need not say more, for I have said enough through the divers speakers; but in the actuated words of expression in this gathering this evening and this morning I Am telling you something more than man can tell you! To think of stormy weather as it may be termed, if it snows, if it blows–matters not how the weather conditions may be, you can see the thousands and thousands gathered around Me! Is not this a Message that is explicit enough for you to see and know God deals in the affairs of Men? God breaks up the playhouses of them, changes your vile bodies in fashion like unto His, and unites you together in the unity of the Spirit, of Mind, of Aim and of Purpose and causes you to “Love ye one another.” Aren’t you glad?

I need not say a Word, but that is My sermon to the children of Men as you see them organized and assembled together–not by power nor by might, but by My Spirit; not by an act of coercion, but by the simplicit spirit of Love, Unity and Tranquility Among us. But this is not the real thing in its fullness observed, this is just a slight sketch and a reflection of it. I will tell you more distinctly and more explicitly when I show you in the very near future when I shall unite all of the nations of the earth together!

This is Merely a sAmple and an exAmple. This is not as it may be termed, “The Real thing,” it is the sAmple and the exAmple. As I have them under the sound of My Voice daily and hourly in the unity of the Spirit, of Mind, of Aim and of Purpose, I shall have all of this Democracy the same; if Men live on the earth! Aren’t you glad?

I think I had better stop! I do not wish to get all stirred up, for I still have My midnight Banquet to serve and thousands are there awaiting Me, even as they are here. I Am talking all the time. Wheresoever I Am, “Congregations n’er break up and Sabbath has no end.” Aren’t you glad? For the recognition and the realization of God here, brings a great emancipation, a freedom and a Memorial and a day that is set apart to serve your God.

At one hundred and twenty-sixth street every night, it is just the same as it is tonight, there, thousands awaiting Me now. At My private residence, city residence, or Madison Avenue daily it is the same. We enlarge our borders there to make it possible to accommodate a good many in the lobby, better known as the reception hall and in the reception room and in the public and private dining rooms; but yet we do not find accommodation to accommodate the masses that come from all parts of the world.

Then I say I will speak in Actions and I will speak in Deeds and I will put My Spirit in them continually and cause them to follow Me. Aren’t you glad? If I will cause them to return all stolen goods, to right their wrongs wherewith they have wronged all mankind and execute a Righteous Judgment between man and man on every hand and in all things, and adjust matters satisfactorily in the Presence of God and Men; there and then I have preached a sermon as no man can! But I Am not satisfied at that; just doing this for those of Mine who are Spiritually awakened – I shall universalize My Religious Conviction and cause others to get it nationally and internationally and become to be new creatures characteristically and dispositionally and walk in My Statutes automatically!

Abundance of All Good Things is Wheresoever I Am

That is the way you will get your real emancipation! Live the life and produce the Christ and bring Him to fruition in your life and put Him forth into expression in all of your activities and in all of your dealings and allow Him to reign as LORD of lords and a KING of kings on the throne of your minds.

When this is done you can declare in reality, the Kingdom has truly come and the Will is being done, for wheresoever a king reigns, there is where his kingdom is! I Am inserting, injecting, inculcating, reincarnating, reproducing and personifying the Christ in the hearts and lives of the children of Men as the Redeemer and the Savior of them.

This is not a question with Me as I said many years ago to those who were with Me – as it is here with Me, we shall have it the same universally and all humanity shall recognize the supernatural Presence, although HE may not be observable in the beginning; I will cause the Kingdom of God to be made visible, even though it cometh not with observation. It does not come with observation, it cometh invisibly, but when it is tangibilated, when it is materialized and when it is personified; then it is visibilated and it is realized. That is what I Am talking about!

I Am That I Am

The Kingdom of God does not come with observation I say, it cometh invisibly firstly, but I Am the Tangibilator, I Am the Visibilator, I Am the Reincarnator as well as theTransmitter and I Am the Reproducer and the re-Personifier. I will cause you to observe and realize that which you Merely surmised with your superstitious, suppositional Religious version.

It is good to have a good superstitious, suppositional Religious version. It is good to have one, but I will take your superstitious, suppositional Religious version and tangibilate it, materialize it and personify it and cause it to be reckoned and realized by all mankind; for I will put it into observation and no longer have it in the mythological Heaven.

A New Heaven and a New Earth

He declared he saw, “A New Heaven,” said he, “and a New Earth, for the former things are passed away.” He said he saw it coming down from God out of Heaven! It was coming down out of your superstitious imaginary Heaven, for the first one had passed away.

In working cancellation on the imaginary Heaven, we bring out of that expression a living reality–I tangibilate and materialize and personify your fondest imagination and cause it and them to be a living reality on earth Among Men. This is it for which you prayed. You prayed to–

“Let Thy Kingdom come and Thy Will be done On earth as it is in Heaven.”