Father’s sermon given whilst at the holy communion table at the Kingston Mansion 67 Chapel street Kingston, New York on Sunday evening August 31, 1952 A.D.F.D. at 9:08 pm. 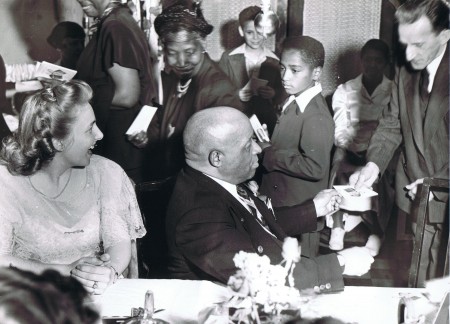 Peace everyone: At this instance I have arisen to say, it is good to be here! Of course, the majority of you know for what purpose we are assembled here tonight; therefore, it is not necessary especially, to go into the details of what we are actually doing here; for when I am personally absent  I am Present and operative and expressive, if you are conscious of it. And when I am Personally Present, as I am as a Person, I may refrain from speaking; I may refrain from action and allow my Spirit in others to speak, as I will speak more effectively at times, in Actions and in Deeds than what I could say in Words!

But we are happy to be here and to see this large assembly, not only here at this place at this instant, but in all parts of the world, where they recognize the different assemblages that have been established with the selfsame conviction and the belief in God, to the extent that they recognize God’s presence all over this wide extended plane! A day being set apart on the twenty-ninth of April as a day of Recognition and for the Realization of Millions, of my Marriage to my Spotless Virgin Bride, One of Whom sits here by my side! I know it sounds somewhat strange to the children of men to speak of a Spotless Virgin Bride, One Who is incorruptible mentally and Spiritually and absolutely untouched and undefiled, but this, the Day, has been set apart as a Review of that Memorial Day of the Sixth Anniversary of my Marriage to this, my Spotless Virgin Bride, for the purpose of bringing about Universal Brotherhood, Democracy, Americanism, Christianity and Judaism as Synonymous!

We shall not be discouraged until we shall have accomplished this Universally, for it is as contagious as that which was once called Hitler’s contagion of Destruction, of warfare and of bloodshed!

Many have called the different nations the breeders of vice and crime, of sin and debauchery of every kind. Many have called the authors and the promulgators and propagators of warfare and bloodshed as that of something that is coming out from a person, yea, from personages. But oh, how glorious it is to realize as contagious as the negative and destructive have been, even so contagious is this, the Righteousness of God into and among the children of men!

Evil communications corrupt good morals, ill qualities are catching as well as diseases, and a man is known by his company keepers.

We are happy to say the reverse is equally true, not only a supposition but our conscious conviction and realization of the reverse being equally true, for as contagious as evil communications, in other words, the Spirit of inhumanity, savagery, brutality and the adverse characteristics and disposition of men, even so contagious is this great expression as a summation of Democracy, Americanism, Christianity, Brotherhood and Judaism as synonymous! We are bringing this into actuality!

For this cause we do rejoice and we are happy to present to the world just a little sketch of what we are actually doing as an outward expression of it!

I have long since declared,

I will preach Christ in Words, but more so in deeds and in actions, and I shall put my Spirit in the people and cause them to walk in my Statutes.

Millions of people walked in the statutes, yea, the laws and ordinances and the characteristics and disposition of the war-mongers that were propagating prejudice, hate and division among nations that brought warfare and bloodshed from shore to shore and from land to land, but we will not allow this to be continued or continually done, I shall vice-versalate, as I have vice-versalated such an expression  and turned it into the Positive instead of the negative.

This is a beautiful audience, as an abstract expression of True Democracy—as an expression and as a sketch of what we will have all over this wide extended plane eventually, where there will be no more divisibility among the nations! And as you heard one of our honored speakers say a little while ago, that I am changing the tides of governmental affairs, I am getting into Government in business,  profession, labor and trade! I am getting into these great unfoldments of humanity when the door is shut! The same Spirit is speaking today! Aren’t you glad!

A marvelous place in which to live!—and such a sketch and as a reflection as a Sample and as an Example portrayed, I am putting this forth in your very midst, to show you the kind of world in which we shall live, Aren’t you glad! where there will be no more warfare, no more blood shed, no more inequality and divisibility among the people! I am Unifying them by the Spirit of my Presence and by the Presence of my Spirit!

Then I say, let these thoughts go home with you, for as you have heard by composition the Message as a Proclamation and Declaration,

Just as it is right here, some day it shall be. All over this wide extended plane!

Take these thoughts to consideration and realize, our being here today is to call attention to those who sojourned here under this Jurisdiction. As it is with ME universally and where I am Personally, so shall it be from shore to shore and from land to land!

Why live in lacks and wants and limitations? Why live in adverse and undesirable conditions, when God Himself, the Author and the Finisher and the Creator and Maker, is Presently with you, now, henceforth and forever? I said a little while ago, my Spotless Virgin Bride is the Same Today as she was when she first stood by my side, the twenty-ninth of April, six years ago! It’s just the same. And so can it be from shore to shore and with all mankind when they get rid of Self and Self-Indulgence and all of the violations of the Ten Commandments! You know what they call for!

When all of those Ten Commandments are lived and put into practice by each and every individual, and when they shall have accepted of the Doctrine of Christ as given on the Mountain, and will live upon this Foundation, there will be no more an occasion of worry; for God Himself will be with you as the Reproducer of the Same Life that was exemplified in Him!

It may be some of our visiting guests that would like to have a few words to say. If any of you desire to speak, you are welcome to do so by moving volitionally, even as we do, if you care to. If you do not care to move volitionally as we do, give us your names, addresses and professions; we will introduce you according to custom.

For this cause I am refraining from speaking, to give access for others, so that they might be partakers of the selfsame blessings. As I afore said, God’s Presence and the Consciousness of It will solve your every problem in the Home of the Brave, or in other words, the Land of the Free and the Home of the Brave, where all men have a Right to this Life and this Liberty in a Land of Plenty, where None need lack and want for anything! I thank you!

Print This Post
All SHALL LIVE THE ABUNDANT LIFE