Father Divine’s message given whilst at the holy communion table of the Circle Mission Church, Philadelphia, Pennsylvania, on Wednesday afternoon November 16, 1949 at 4:23 pm. 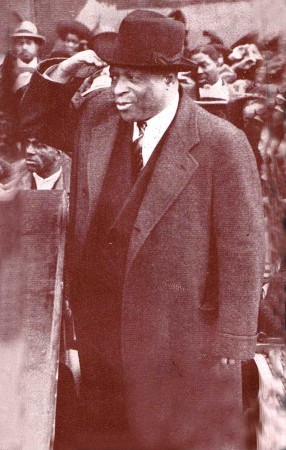 A nation is rising rich in the virtues
Of Americanism rebirthed by GOD,
Rich in honesty, brotherhood and peace,
Where a man is a man and not a color, creed or race
A people charged with the current of Justice
That has changed the tide of governmental affairs!
A Righteous Nation under Father Divine is rising
Electrifying the atmosphere!

Peace, Everyone: That little composition so often sung but deep to be considered continually, for in reality the Message is explanatory in itself, it needs no explanation, when you, My fellow citizens, hearers and friends look about yourselves you can see the personification of that little composition taking place in your very midst!

“A Nation is rising rich in the virtue of Brotherhood and of Peace. Rich in Honesty!”

All of these qualities are the attributes of GOD so profoundly propounded in the actual words of expression until you can speak without a reasonable doubt that I AM changing the tides of governmental affairs! I have long since declared I shall not be discouraged and I shall not be disturbed until I shall have contagionised it universally with this great contagion of Righteousness of Brotherhood and of Peace, where a man is a man and not a color, creed nor a race! I need not say more as I have long since declared even though I send it out by composition as a matter for the consideration of the people.

“I will preach CHRIST in Words but more so in deeds and in actions, and I will put My Spirit in the people and cause them to walk in My Statutes.”

You can see, those who are not even called My adherents and following, they are walking in My Statues of Honesty, of Competence and of Truth, for this great contagion is actually changing the tides of governmental affairs! It is changing the world in which you live, for it is so contagious, even if you are not susceptive you will catch it! Aren’t you glad!

It is immaterial to ME whether humanity in general is susceptive or not, this great contagion, I have contagionised it so with the virtue of brotherhood, honesty and of peace until it will affect those who are not susceptive and those who are rebellious and reject it! Aren’t you glad!

New ideas are rising in the hearts and minds of men even in opposition to what they have been and what they have been doing. They just can’t help themselves for GOD is Omnipotent, Omniscient and Omnipresent, and His Omnipotence is his Truth as transmitted will impregnate them with it. Aren’t you glad! Therefore, they will get it and get it effectively from shore to shore and from land to land; and all over this wide extended plane some say it shall be as it is right here at My right and at My left hand, where there will be no more races, creeds and colors; no more abominations of divisions among us! Where GOD in the midst of the children of men shall bring them back to the place where they were in the beginning of the creation when they were all of One Nation, yea of One Language and of One Speech!

At this particular instance I stand to say, we have visiting guests as usual. We hope our visiting guests will make themselves free to speak, to act or sing or whatsoever they will to do, since this is the Cradle of Democracy and the Hall thereof, (aren’t you glad!) where all are welcome to speak and move volitionally even as we do if they care to! If you do not care to move volitionally as we do, give us your names, addresses and professions; we will introduce you according to custom.
This invitation I extend to you, My guests and friends and all, as strangers in the audience, as well as those of you who are at the table. Feel free to be governed by your highest volition. I will be with you! I AM that of which I have declared to be and universally declared to be in the conclusion of MY letters! MY attributes I repeat silently but you will get it and will get them very explicitly as I reveal it. I thank you.