In the Scripture after much turbulence between peoples it states that the land had rest for many years. I want to thank You for giving the “Turf” rest in West Philadelphia. For many years this area has been terrorized with gangs fighting over their land or “Turf” as they call it. 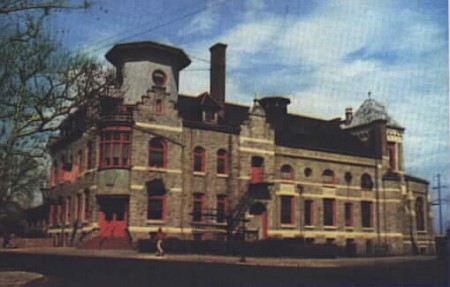 The Unity Mission Church at 41st and Westminster Ave. (pict. above) was the dividing line of the “Turf”. If a gang crossed that line there was open warfare. During those years from 1966 to 1976 we saw many young boys killed, knifed, shot and wounded.

With the entering into the second Century of our Nationhood and the celebration of the Bicentennial things began to quiet down on the “Turf” of the “Western Front” in West Philadelphia. There has not been any gang wars since then. I feel this is because of You Father and Mother dear. For many years the gymnasium at the Unity Mission Church was open gratis to all the children in the area, plus the P.A.L. and Cadet Corps. groups who traveled to the area and were supervised by your own virtuous followers who cared for the youth.

The youth that were cared for at the Unity Center Gymnasium during those years of active gang warfare are now in their early teens and early twenties and have passed over the crisis of gang warfare. There seems to be no new gangs started in this age group since 1976. I sincerely feel this is because they were allowed to come into the atmosphere of your Presence in the Unity Mission Church Gymnasium for those tender years when a child is so easily influenced.

Many of the gang members have been eating in the cafeteria of the Unity Mission Church since they were eight to ten years old and we saw how they entered into the gangs. This was before the gymnasium was open gratis to all. Now they are in their mid twenties and early thirties and last year many would come to eat and tell us that many of the boys are now working steady, some are married, several in prison and many killed during those years from 1966 to 1976. 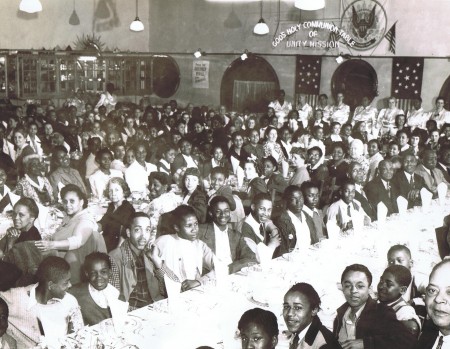 We had very little trouble with them when they used to come into the cafeteria when they were active in gangs because they knew as long as they came into the church and acted decent and respectful that they were always welcome and that we would enjoy serving them. Some of them now in their late twenties tell us they did not know how we put up with them for they were so bad. Everyone that served them in the church served them with kindness and respect because we knew that Father and Mother Divine would have done the same for them.

Recently one of the parents of the boys who lives in the neighborhood of the church said if it was not for the Unity Mission Church in that neighborhood it would not have been safe to live in that are. Just the fact of the church being kept violent crime in check.

I also want to thank you Father and Mother dear for the many boys in West Philadelphia that were raised through Your Church, for the Bible Classes that you made available to them, for the many trips that you took them on in this city and New York and New Jersey. They traveled “Royally” in the church limousines and were housed in the beautiful hotels under the name of Father and Mother Divine. 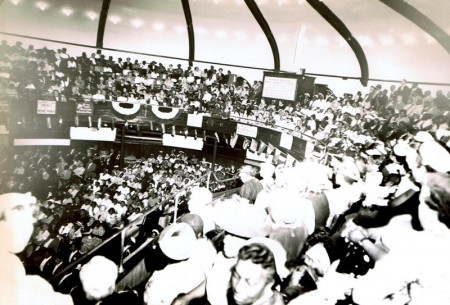 I thank you for blessing them to spend many beautiful summers at Woodmont, the Mount of the House of the Lord to swim in the pool. I know that they will never forget this as they grow up and enter into society for they will never find such unselfish love anywhere in earth as they found in being acquainted with Father and Mother Divine.

Recently three boys have told us how they are now preparing to enter into college. Their parents do not have the means to send them so they are working their way through. One boy is receiving a scholarship in Physical Education. He said learning to play basket-ball in the Unity Mission Church Gymnasium gave him the desire to do this. I know it was no one but you Father and Mother that lifted the boys’ minds out of the life in the ghetto to a better life.

I give all honor and glory to You as I see these youngsters growing up through their teens and early adulthood for I know it was being in the environment of Righteousness, Holiness and Cleanliness that has made decent people and better Americans out of them.

Again I thank you Father and Mother Divine for I know it was Your love and influence that has given the “Turf” rest in West Philadelphia. I know that You will give the “Turf” rest nationally and universally.

I thank you Father and Mother Divine for blessing me to give service in Your Unity Mission Church for so many years in what is considered or termed the ghetto. I have met so many beautiful people in the neighborhood and they all are a different complexion from me but because of you Father Divine, we are all one. I have never considered myself different from anyone that I have met in the neighborhood. They are a part of my universal family. I thank you also for the great privilege that you gave me in serving the masses in Your name. I enjoyed every minute of giving service in Your name. I enjoyed all of the people that I was blessed to serve.