In Father’s private office of the Circle Mission Church, Home and training school of Pennsylvania. 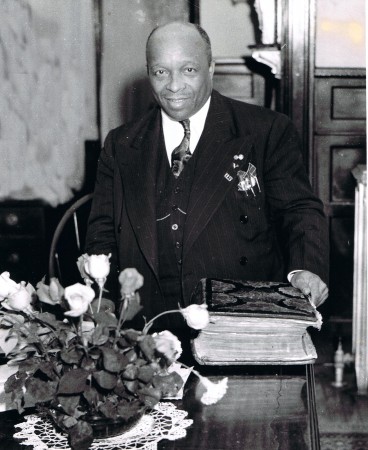 Father Divine in his office

Father: How are you?

Mr. Star: Father, this is brother Star in Oakland, California.

Mr. Star: I mailed you a letter regarding that airplane trip advertised in The New Day.

Father: Yes, I just see it here in my mail. I haven’t had time to read it yet.

Mr. Star: Father, the company said they got an interview with you and I want to get your approval on it, that you said we could go on with them.

Father: On the airplane trip?

Mr. Star: They said they saw you and had a talk with you. I mailed the telegram to you and we want to get your approval to see if it is correct or not.

Father: No, I haven’t seen them personally.

Mr. Star: Well, we just wanted to find out if you approved of that ad and we wouldn’t want to travel on that plane unless we get your approval. Mr. Willing Heart said for us not to pay any attention to that ad in The New Day because that ad is nothing but a false. So we don’t know what to do, Father, whether we should make reservations with Mr. Willing Heart or with the company in The New Day?

Father: Well, I did not put the ad in.

Father: I just saw the ad the same as anybody else and I have not been personally interested in the ad. I haven’t been travelling by plane.

Father: It is up to the individuals, whomsoever wants to travel that way. Of course, it must be authentic since it is in The New Day as a public advertisement.

Mr. Star: I see, Father dear. All right then, we want to co-operate with Mr. Willing Heart.

Mr. Star: Is it all right to go with Mr. Willing Heart?

Father: Well, it doesn’t make any difference to me.

Mr. Star: Well, myself, I want to do what you say, Father. I have your spirit, but then I want to know if the Sky Ticket is okay to travel with?

Father: It is up to the individuals to travel in any way they choose – in whatsoever way would be the most reasonable to go – whatsoever they would prefer.

Father: I don’t bear record exactly which would be the most reasonable for them.

Mr. Star: I see, Father dear. All right; that is why I called because I wanted to get firsthand information from you, God Almighty. It is not because I am in doubt of myself to fly in the air, on land or anything, but I did not want to go against your spirit or your wishes.

Mr. Star: So that is why, Father dear, I wanted to hear from you.

Father: Well, so long as everybody is in harmony with my mind and spirit and will do the thing that is the most practical and profitable and the most constructive, it would be all right.