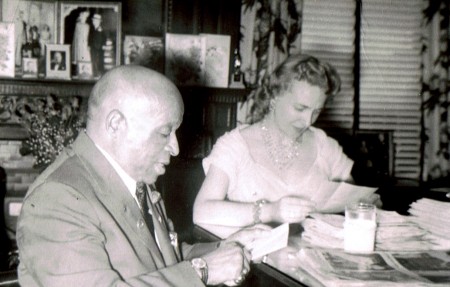 Below are a few examples of numerous correspondence addressed to Father Divine personally and also his responses to them. Letters poured from virtually all over the world from people seeking Father’s blessings, advice, support or simply expressing their love for Father Divine and sharing their stories of faith and conviction. Father’s secretarial staff was sure kept busy sorting through all that mail given that he tried to reply to as many of the letters as possible.

Thank you, dear God Almighty, for your sweet holy beautiful body that we love and adore.

We thank you Father, for you presence here, for your presence has brought freedom from every angle to the world at large. Father, I told him, and all that were on the bus, “Such as this is the cause of all the disasters in these United States, because they are not united, but divided”. I moved after telling them what I did tell them. Some of the people nodded their heads and said, “You are right.”

The driver did not want me to sit up front. He told me he did not make the laws, that they were state laws. After that, I felt sad and had to thank you to keep me from crying. Father Dear, I am so glad that you are here, dealing in the affairs of men. They will not be able to do as they have done.

I am sowing the seeds of unification

Your communication of the 24th ultimo, telling of the segregation you encountered on the bus, is at hand for reply and I am responding to say, such prejudice and discrimination that has been flourishing at home and abroad is what I have come to put an end to! And I am doing it!

The mere thought of such acts of prejudice – segregating and dividing the people like that, when the boys of every so-called race, creed and color are fighting side by side in Korea for Peace and Harmony, is disgusting.

Truly, my spirit is breaking down those barriers of segregation though! Through the righteousness that I have instilled in thousands I am sowing the seeds of unification and harmonization! These seeds are taking root and springing forth in the hearts and lives of many.  And all who allow them to have access and room to grow will be blessed, but those who continue in their prejudicial ways will have to pay for it in terrible retribution, in disasters, in floods, storms, in airplane crashes, in tragedies and catastrophes of every kind!

It is not the will of God that the people be divided! It is not in my righteous plan! For this cause, things will not run smoothly and harmoniously as long as division, discrimination and all the abominations of mortality are in evidence on this globe!

It has been written and proven that

In the future, it will be more explicitly demonstrated in the actuated words of expression just how the inconsistency of mortality – their prejudice, bigotry and pride – will be an abomination  to them and how the righteousness of the righteous will be their salvation as their way is made plain!

Therefore, you need not feel sad whatsoever when you have any such an experience as you mentioned, for my spirit is eradicating the very seed idea of prejudice and eventually we shall have a glorious church without a spot or wrinkle universally established just as I have it where I preside personally.

Thus, rejoice to know you have this conviction, you have this hope and this assurance that my righteous plan will be in effect more and more from land to land and from shore to shore. And some day it shall be just as I have it jurisdictionally, all over this wide extended plane.

Hence, with every good wish, this leaves me as I would that you and all who are worthy might become to be, for I am well, healthy, joyful, peaceful, lively, loving, successful, prosperous and happy in spirit, body, and mind and in every organ, muscle, sinew, joint, limb, vein and bone and even in every atom, fibre and cell of my bodily form.

Respectfully and Sincere, I am

Enclosed you will find a clipping from our Sunday Press Telegram. I regret to say I was not aware of that condition there. It sure made me feel badly. It is only knowing you that will right the wrong done to your children and renew the faith in our democracy that that brother had. Many thanks for all your blessings, Father dear and blessed Mother.

I hope I am still yours, with love,

Fourteen voters expressed no opinion in the unofficial election suggested by 25-year-old Sing, who already had purchased a home. Sing said he would abide by the results, although US Supreme Court ruling has made racial covenants on real estate inoperative. Just before the votes were counted, before some 100 assembled home owners, Sing asked to be allowed to speak and declared: “If the balloting is against me, it will prove we are fighting in vain in Korea.”

Afterward, after his pretty wife wept, he said:

“We’ll have to sell the furniture we bought to go somewhere else to live. I hope the people are happy now, and will live secure in the knowledge that their property values will continue to rise.” The assembled house owners would not allow themselves to be quoted on why they voted against Sing. Many even refused to tell reporters their names. Their remarks indicated they feared property values would fall if Sing moved in. One man was overheard to remark that he understood “dozens” of Orientals planned to move to Southwood if Sing was accepted.

Jack Denison, who sold Sing the house, said he would refund the money.

The ballots mailed to Southwood home owners, were counted in a neighborhood garage by South San Francisco City Manager Emmons McClung, acting in an unofficial capacity. Of 253 eligible to vote, 31 did not return ballots. Six ballots were voided.

Sing, a graduate of Earlham College in Indiana, made a $2950 down payment on a Southwood home two months ago. Immediately, he said, he started receiving protests from neighbors who claimed his living there would lower property values.

“At first,” he recalled, “they tried to use a little bit of threat” – it was suggested little children might throw rocks and dump garbage on the house if I bought it.

“I was not born in America and didn’t understand.”

But he said he met with Southwood home owners, discussed the matter and proposed a vote – “Because I was sure everybody really believed in democracy.”

The Southwood tract, bordered by the fashionable California Golf Club, formerly was covered by an all-white covenant written into land deeds.

The U.S. Supreme Court ruled last year that such covenants were unconstitutional. Authorities said Sing could not be kept out of the area by law. An officer in the Chinese army, Sing came to the Unityed States in 1947 to study for diplomatic service. When the communists took over his homeland, he stayed on to become an air-line mechanic.

He and his family now live in an apartment in San Francisco’s crowded Chinatown.

I am writing to acknowledge receipt of your letter of the 18th ultimo with clipping concerning the undemocratic action of the majority of residents in the Southwood district of San Francisco, in voting against one of Chinese birth from taking up residence in a home he purchased there.

I believe that the State and Federal Government should step in and demand the freedom of the family to take up residence where they have chosen, and they should give their protection to them and make a law against any act of violence against them or their property.

It is indeed a mockery against Democracy to find such un-Americanism practiced freely in this country.

If the people of a so-called respectable neighborhood are respectable at heart, how obscene they would appear to be to throw garbage and use violent acts against the new family because the gentlemen is Chinese born and the lady American born!

It is time for the evil prejudice to go. A house divided within itself cannot stand.

Why should property values be lowered because of a person’s so-called racial lineage, so long as the people or family in question keep their property up the same as others?

Hate and segregation, social injustice and economic partiality within a community shall be the underlying cause of disasters, afflictions and calamities among the people, and none need wonder when destruction comes upon them, why retribution descended upon them.

It is true, as the gentleman asserted: “If the balloting is against me, it will prove we are fighting in vain in Korea.”

When the fighting in Korea takes a bad turn against us they try to blame it on politics – on party politics, but it is nothing but ungodliness and racial hatred that propagates wars and inhuman bloodshed among the people.

If America is to stand, it shall be as one people. Those who do not want democracy can go elsewhere.

With best wishes, this leaves me, as I am ever well, healthy, joyful, peaceful, lively, loving, successful, prosperous and happy in spirit, body and mind and in every organ, muscle, sinew, joint, limb, vein and bone and even in every atom, fibre and cell of my bodily form.

Respectfully and sincere, I am